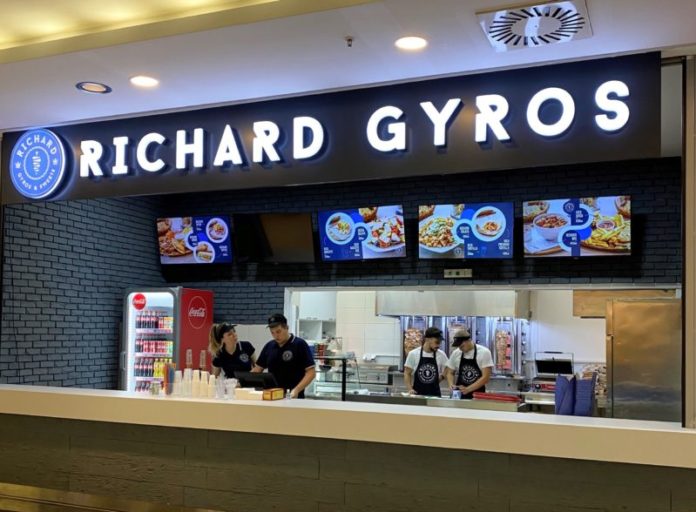 The new fast-food restaurant is located on the second floor of the mall within a unit of 70,95 sqm. Its menu offers premium gyros and a variety of waffles, prepared in accordance to authentic recipes.

This is the third Richard Gyros restaurant in Belgrade and its fourth in Serbia. The fast-food chain has ambitious plans to expand its network across the country, on high streets and shopping malls, while a franchise model is being developed.

The first Richard Gyros in Serbia opened in 2017 in the city Lazarevac and has later expanded to the county’s capital, Belgrade, on Kraljice Marije Street no. 8.

This year the chain continued to expand in Belgrade by opening its second location in the capital on the famous BW Sava Play promenade, part of the new Belgrade Waterfront project. Stadion shopping center is now its third restaurant in the city and its first mini food corner concept.

By the end of 2020, the restaurant chain aims to open two more locations in the capital which will be located in municipalities Vračar and New Belgrade. After these openings, the company will be investing in completely centralizing its production operations in one location, which will supply all of its current and future restaurants, including its future franchise units.

Richard Gyros will be expanding through two formats, premium fast-casual restaurant format on strategically important locations and mini food corner format that will be developed within shopping centers.

THE IMPORTANCE OF GASTRONOMY

Food services are playing an increasingly significant role in shopping centers and Stadion shopping center is following this trend by continuously widening its selection of international cuisine in order to satisfy a variety of tastes and preferences. Its offer currently includes McDonald’s, KFC, Caribian Pizza, Asia Food, Mini Pani bakery, and many others. View the full tenant mix of Stadion shopping center HERE.

This year the mall is investing highly in updating its food court area, being fully refurbished to become the most attractive venue of its kind in Belgrade.

We spent a lot of time on the first conceptual design phase of the project, which is now completed. Our goal is to transform the food court into the most attractive area of the shopping center, which is why we focused our resources on this project. The end result will be truly impressive and beyond comparison to any other food court in Serbia.

Spreading over 75.000 sqm, the project has a retail area of 30, 000 sqm. It is Europe’s fourth-largest facility of its kind, with a football stadium on its roof capable of holding 5.000 spectators.

In addition to the vast retail offer, its tenant mix comprises of various cafes, restaurants, services and entertainment centers such as Dreamland, Game Pub, GameS, and Health Care Fitness Center.

Retail SEE Grouphttp://www.retailsee.com
Retail SEE Group publishes articles about the retail real estate market and distributes it to the international business community subscribed to our newsletter. If you would like us to cover a story about your project, company, or brand please contact us.
Facebook
Twitter
WhatsApp
Linkedin
Viber
Previous articleWestgate Shopping Center Welcomes Era Concept Store
Next articleSportina Group Enhanced the Fashion Offer of Aleja Shopping Center

Stadion shopping center has expanded its home décor offer this April, with the opening of a new store S Dream specialized in mattresses, pillows, beds, and beddings.
Read more
Retail

Due to the increasing demand from retailers to advertise on Facebook and Instagram, the company is launching new advertising capabilities.
Read more

Reselling Used Items is a Growing Trend Among Retailers

The secondhand market is one of the fastest-growing economic sectors within the fashion industry and a growing number of famous international retailers are now testing out a resale program where they allow shoppers to sell and buy used items.
Read more