Ada Mall in Belgrade 2022 results show an increase of 30% in footfall, turnover, and income. Find out how they managed to achieve their business success.

According to Alex Linchev, General Manager of Ada Mall, their footfall, turnover, and income have increased by 30% compared to the previous year and surpassed pre-Covid levels. Net Operating Income (NOI) growth soared even higher, with some key tenants striking nearly a 100% increase in their individual turnovers, which is far more than expected.

Certain performance KPIs went through the roof, such as the Ada Mall Loyalty Club which exceeded 40k members and accounted for nearly 14% of the entire mall’s turnover.

How Did They Do It?

Alex Linchev explains that this performance success was not achieved in 2022, nor was it due to the organic post-Covid customer “revenge shopping” era.

The victory was thanks to the painstaking work done in 2020 and 2021. Alex says that only a few months after Ada Mall’s opening, it was proven that certain tenants and concepts were not well suited for the mall. Therefore the management had to take the difficult and even self-harming decision to venture into new investments, and change major points in the tenant mix to secure the mall’s future.

In the midst of the pandemic in 2020, Ada Mall management also took the risk to invest in a ground-breaking Loyalty Program worth hundreds of thousands of Euros. The loyalty program became the first fully integrated mall platform with virtually all tenants becoming part of it. Besides its tenants Ada Mall also managed to bring in out-of-mall local community businesses, from theatres to national airlines, to join their loyalty program offer.

When many others were renting billboards and engaging celebrity influencers to boost marketing trivia, Ada Mall also opened the first in-mall library, set up monthly local school competitions, brought in 100+ local designers, and introduced many other innovative activities.

This is the hard work of my great team, that bridged the distance between tenants and vendors, and found a way to give a personal approach to the mall’s young, value-oriented and stylish customers! To all of them, I am humbly thankful and we look forward to a new year. 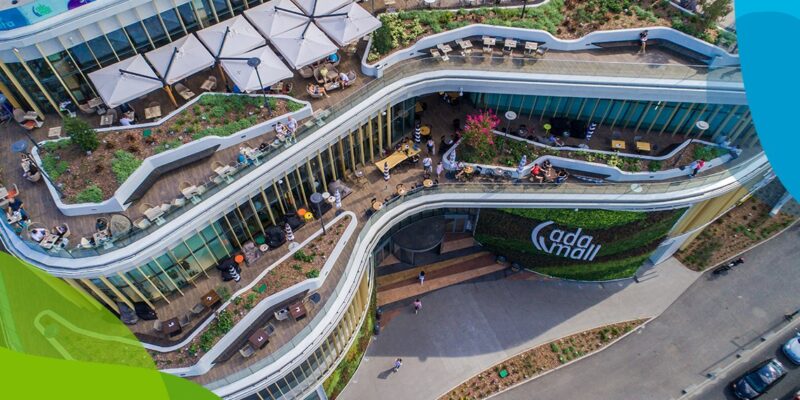 The mall opened in 2019 and was a 105 million EUR investment. With a gross leasable area of 34,000 sqm on five levels, it offers a unique shopping experience. The complex is well-connected to public transport and features three floors of underground parking with approximately 1,000 parking spaces.