CONSTRUCTION STARTS FOR THE FIRST CINEPLEXX IN SARAJEVO

Cineplexx, the strongest cinema chain in South-Eastern Europe, celebrated on the 11th of June the start of construction of its first multiplex cinema in Sarajevo, the capital city of Bosnia and Herzegovina.

The project is being done in collaboration with Hotel Europe Group and with the support of Sarajevo Film Festival.

At the ceremony CFO and Managing Partner of Cineplexx International, Christof Papousek, Managing Director of Hotel Europe Group, Rasim Bajrovic, and Mirsad Purivatra, Director of Sarajevo Film Festival welcomed friends and partners to the first official announcement of the project. 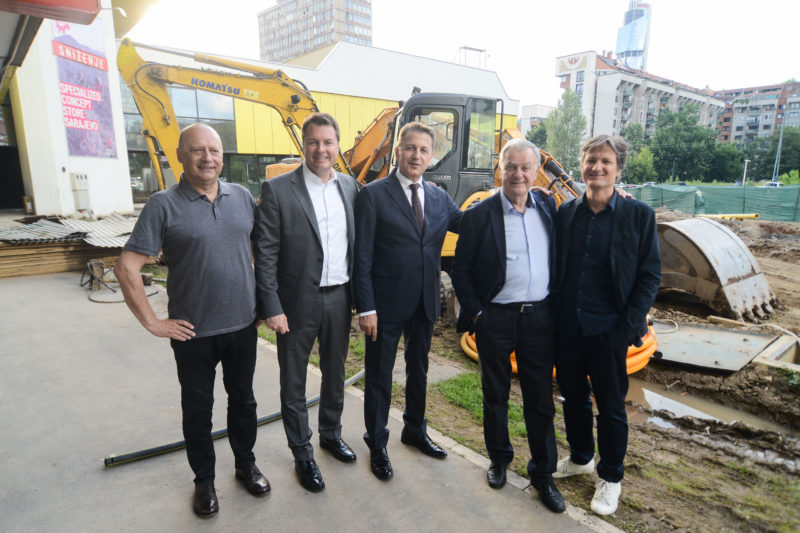 The cinema will be located in the city center of Sarajevo and is expected to be opened during the summer of 2020.

Cineplexx will build eight cinema halls with a total capacity of 1.400 seats. The cinema will offer state-of-the-art cinema projection technologies, which will feature national and international movies in a modern and impressive environment. The high service standards of Cineplexx will guarantee its visitors an enjoyable experience.

“We are very proud to open our first cinema in Bosnia’s capital city. As an innovation leader we are committed to offer our visitors the best cinematic experience”, stated Christof Papousek, CFO and Managing Partner of Cineplexx International.

Famous Sarajevo Film Festival, an international film festival focused on the SEE region, confirmed that Cineplexx Sarajevo will be the next location for their well-known festival

“We appreciate the strong support of Sarajevo Film Festival and to have a sophisticated local partner for our operations in Sarajevo.”, confirmed Christof Papousek.

NEWCOMER TO THE ROMANIAN MARKET

Besides Sarajevo, Cineplexx has several other projects under construction.

The group of cinemas recently expanded to Romania with the acquisition of the 2700 seats Cinema at Baneasa Shopping City, one of Romania’s most visited cinemas. Two more locations will be opened until the end of the year in Romania.

In October this year, Cineplexx is scheduled to open its first cinema in Prizren. It will be the second location of Cineplexx in Kosovo. The group is very successfully operating in Priština since 2016.

Cineplexx International GmbH is part of the Austrian based Constantin Film Holding GmbH, founded in 1951 as a film distributor in Austria.

With around 1,500 employees, the company generated sales of around 130 million Euro in 2018. In 2018 the Cineplexx cinemas welcomed almost 12 million visitors.